When to Embrace Change (And What Gets in The Way)

Have you ever heard of Johannes Väänänen? In part, this blog is about why your answer to that question might be “no”.

You see, while Steve Jobs and Apple go down in the annuals of history as the inventor of the smart phone. That honour goes to Väänänen and his “MyDevice”.

You can probably guess why I’m starting a blog on knowing when to change with that factoid. Because when Väänänen took MyDevice to Nokia in 2002 – the Finish company that dominated the cell phone market at the time – they declined. According to Postimees, an Estonian newspaper, Väänänen says, “Nokia wondered why would anyone want to dirty the screen with their finger? They said with confidence that they had been looking into touchscreens for a full decade, and that they would never work.”

That unwillingness to embrace change is what this blog is about.

What I’d like to do is think about when to change. Then I’ll tackle the harder question: what makes it hard to step into change?

That companies need to change and adapt is probably obvious to most of us. Part of the reason for GMs renaissance was a willingness to bring products like the Volt and Bolt to market (a government bailout didn’t hurt either). McDonald’s introduction of McCafé, for example, happened in response to the growth of coffee shops as the “third space”.

My point is, what makes companies successful isn’t just changing, it’s recognising when they need to change. And that depends on a simple graphic: the Sigmoid curve. 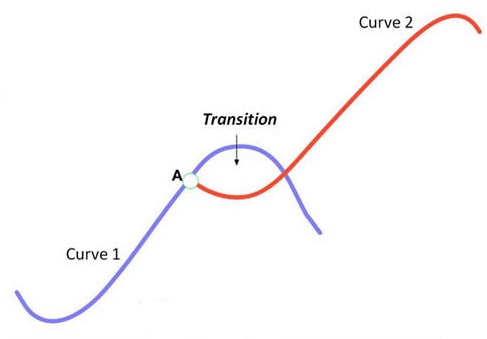 What the curve highlights is the sweet spot of change. The best time to adapt is when we’ve realised the gains of one trajectory and before that trajectory begins to dip. It means we can “jump the Sigmoid curve” from one ascent to another without having to experience the downturn.

That’s the value of strategy: it helps us anticipate the transition. I’ve written about strategy in other blogs, so that’s why here I’ll focus on what makes it hard to embrace change.

A Lesson from the Recent Past

To say turning down the smart phone was the reason Nokia collapsed may be putting too fine a point on it. But there’s a clue in what makes embracing the need for change tough. In that same Postimees article, the writer makes the point that Nokia’s confidence that touchscreens would “never work” was an example of the attitude that caused Nokia’s eventual demise.

That’s just as true for Kodak – the company who first patented the digital camera. While there’s a myth that Kodak invented and then hid the digital camera fearing the demise of its film business, HBR tells us, the truth is that Kodak spent millions marketing a digital camera – the Easyshare. But even though the camera presaged apps like Instagram, Kodak instead focused on printing digital pictures.

The lesson to take from these companies is that seeing (or even inventing) an opportunity to change an industry doesn’t mean we take it.

And for me that happens for two reasons. Like the executives at Nokia we feel that we’re experts and know the next step to take with certainty. There’s a reason that old adage “pride before a fall” is still around. It’s a good idea to be mindful of any kind of certainty because certainty in an uncertain world is rarely going to end well.

The bottom line of the expert mind’s effect on embracing change is that when we’ve been in an industry long enough, we start thinking we know all the angles. And if we think back to the Sigmoid curve, that might be true for the first ascent, but that doesn’t mean we know the landscape of the second curve, or when to jump. But the expert mind is what kept Nokia and other tech companies, including Microsoft, from adopting Väänänen’s invention at the time.

At Kodak, it was something else that made it difficult to embrace change. The idea that digital was interesting, but film and printing were king. That single belief is the biggest factor in Kodak’s downfall. And it’s what I call a cherished idea – holding onto an idea because we think it’s right despite evidence to the contrary.

As Chunka Mui tells us in his Forbes article, “How Kodak Failed”, “Kodak management’s inability to see digital photography as a disruptive technology, even as its researchers extended the boundaries of the technology, [comes down to understanding why] Kodak could stay in denial for so long”.

And for me the core of that denial is understanding they weren’t in denial. They really believed they were right because their sense of “self” as a company was so wrapped up in film, thinking anything would replace it was beyond comprehension.

Thinking like that is the mechanism of how a cherished idea works. We’re so wedded to an idea, we can’t imagine that it’s not true.

Questions to Ask Yourself

The take-away from Nokia and Kodak is that holding onto our certainty and cherished ideas makes seeing opportunities to “jump the curve” hard if not impossible.

We believe the ascent we’re on is going to last forever. We get complacent, and we stop questioning ourselves.

So let me end this blog with three questions. Maybe your business is on the ascent right now, maybe you’re looking at a disruptor in your field. Whatever the circumstance, ask yourself these questions to see if it’s time to embrace a change:

Answer those questions and it leads to a fourth. The question is this: Is my business set up to embrace these disruptors?

Your answer to that last question may help you decide if it’s time to embrace change.

What to dive deeper?

Our approach starts with an interactive experience. We work with your teams to develop the six attributes of a leadership mindset that enables them to work together, model leadership, and come up with solutions themselves.

Our consulting ignites a revolution. It grows the six attributes and operationalises leadership behaviours. Not only do your people have great ideas, they have the mindset to make those ideas succeed.